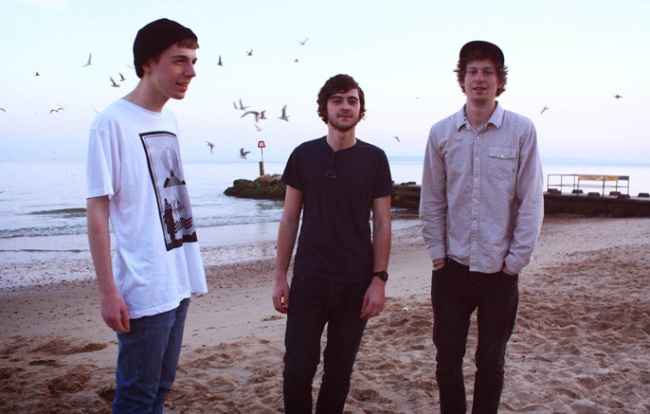 Bos Angeles could well become a byword for incredibly blog worthy British bands who disappear, possibly as victims of their own internet-based success. We had one single fleeting year of Bos Angeles before they split up, and maybe that was all they were ever going to give us in the first place. For me, their breakup was akin to Kurt Cobain getting tired of the world and killing himself so as not to sell out.

The Bournemouth 3 piece was easily misrepresented. I remember reading a review in Loud and Quiet of one of their live shows, and some paraphrasing of the article has always stuck with me, but here is the actual article and this is the actual quote:

‘Even without knowing that Bos Angeles’ bassist wears a backwards baseball cap this evening, you can probably guess what kind of music this London trio peddle. I mean, they’re called Bos Angeles! As such, they neither shy away from their American slacker influences, nor take themselves outrageously seriously’

Maybe this is one piece of bad journalism; they weren’t from London and Bos Angeles is actually local slang for Bournemouth’s ‘most likely to get stabbed in toilets by prostitute’ suburb, Boscombe, but it’s easy to be fooled by some of their song names too. Perhaps they undersold themselves; ‘Beach Slalom’, ‘Makin Waves’ and ‘Endless Summer’ do conjure up welcome, but clichéd images of sun-drenched, beer swilling Californian days and sound like classic surf pop song titles. The truth is that Bos Angeles is a long way from such idealism, and the band’s sound is much more routed in the semi-depravity of dreary Boscombe reality than in what one would suppose to be their influences.

The humble pulse of the bass line and drums drive ‘Beach Slalom’ forward, allowing the song to progress with energy until it reaches the crescendo of crashing symbols and a simple, glowing, Joy Division-esque guitar line which gives a feeling of incredible intimacy. The song has a genuine shivers-down-back-of neck-sending quality and at the culmination of their ‘break out’ offering it’s as if we have come to an understanding with Bos Angeles that they are not necessarily a buzz band with a bright future, but haunted by demons and the possibility of mediocrity. It had me crying into my Red Stripe, basically.

At the end of their career Bos Angeles released a chronological 21 track album on the brilliant Tye Die Tapes, of everything they ever recorded and they called it ‘Taking Out The Trash’. The throbbing bass line and drums, borrowed from surf-pop, act as the heartbeat for most of the album, but it does include slower, shoegazey moments  such as ‘June’ and the super lo-fi Keel Her cover ‘I Hate it When You Look at Me’. The other blog-friendly tune, ‘Days of Youth’ and the searing guitars of ‘If Our Parents Were Gone’ are also highlights, continuing the album’s concurrent theme of regret and missed opportunities. It’s seems almost bitingly ironic that they are kind of a surf-pop band, such is the austere nature of their sound and lyrics. Perhaps Bos Angeles are to scrappy surf-pop what a bleak, rain-ruined visit to an ex-English seaside resort is to a day spent on Santa Monica beach. Sure, it’d be easy to feature-spot the similarities but overall the tone and end result are very different.

I saw the final incarnation of the Bos Angeles line up live in London a few months before they split up, and although it was a tight performance there wasn’t an obvious sense of enjoyment in togetherness. For any band there’s probably a skill in knowing when to stop and resign yourself to the ethereal mysticism of the ‘hyped band’ history books, but here’s to never forgetting Bos Angeles.